← Next Post
⇨it’s the 6th of March twenty twelve →

Lately Popcorn’s been practicing a ritual during her meal times. The fur kid wouldn’t eat from her food bowl after sniffing it unless someone picks up an Acana kibble and places it in front of her. 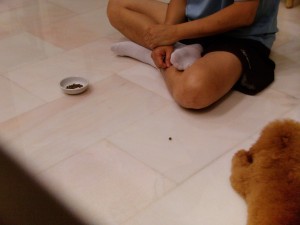 But before she considers approaching her food bowl and getting started on her big meal, Popcorn would sit beside me, look up at me, and hope to God that i would pick up another kibble and place it in front of her again. She would even wait a couple of minutes to see if it’ll really happen. Well i gritted my teeth, and tried very hard not to give in to her bright bright bambi eyes. :P

And just when i was about to stretch my hand and reach for the food bowl, tee-hee, fur ball picked up her bum and sashayed towards her food bowl. I WON!!!! :D

Zebit was just out of the shower today and Popcorn and I were uber excited to play fetch ♥ :D However several throws later, Zebit decided to go for a swim in the water fountain at the top of the stairs. =.=” Popcorn and i stared as Zebit flew across the crate, plunging into the pool of water. oh boulders. Now, he’s back in the shower again.

when Poppy expects to see Zebit landing at the end of the living hall, but turns around and finds nothing there.

i love seeing her looking lost when i hide the toy i’d pretended to throw. oh boy. that face so priceless. i must, absolutely must capture that on video :) oh.. she circled about the living hall searching the corners. she ran up the stairs peeping behind my back. she ran into her crate hoping to find zebit, and looked behind the cushion digging and digging. :P

Now who’s afraid of yet another bulky item?

The item in question: Mommy’s set of golf clubs, and bag. =D

So as Mommy walked past the living hall with her giant golf bag and two Drivers, Poppy walked sideways away from the bag with her tail stuck between her legs. She couldn’t stand being anywhere near the object. oh baby. There’s nothing to fear here. It’s just a giant bag. :D So i used the same method i have always used in every of such situations. I called Poppy over excitably, and made her run towards me, where coincidentally, the bag also happened to be at. heh i tricked her into coming close to what she feared. Eventually, i would run around the living hall carrying whatever that object was, and play chase with Poppy until she was no longer showing fear. So yes, imagine me carrying a golf bag filled with 18 hole clubs, running about the living hall playing chase with a puppy. Phew.. i’m glad that was worth the effort there!! 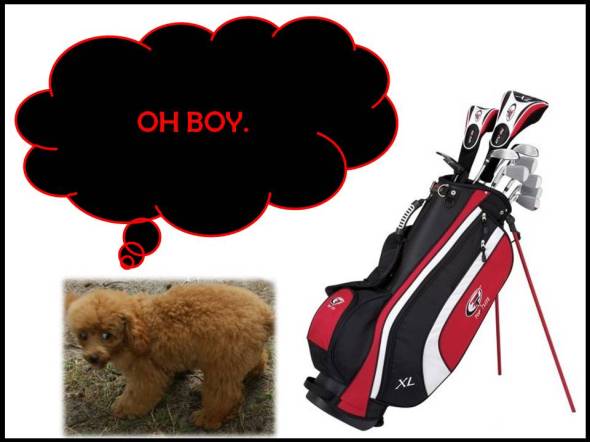 We’re off for our evening walk :)

Two kids threw aside their bikes and came running towards the side walk. “Does the dog biteeee?” :P how adorable!

Poppy picked up a plastic piece while walking today. :D She walked like a proud owner of a new toy until i Shh-ed!! her and asked her to release it. >:D how evil of me. :P

I’m looking for a Dog Dryer :}

Anyone knows of a good brand? Thanks!!