MOM JUST TOLD ME THAT MY FACEBOOKIE PAGE REACHED 300 LIKEYS!

Thank you so very much furiends!!!

Dear Harley and Bentley posted this on our wall. :D

And what a beautiful photo of fireworks right! :}

Thank you Harley and Bentley for celebrating this joyous occasion with us! ♥

We walked on a new path today and met twooooo toy poodles! :D The lady owner said this one thinks she’s a Doberman! Haha. :D She sure did, that little black poodle! She stood tall and strong, body in a forward charging motion but not exactly aggressive. :D Popcorn however was timid as can be, she scooted past the black poodle with her tail between her legs. Mmmm. What’s wrong baby? Was she aggressive in your opinion? I was thinking… perhaps we should enroll Poppy in Doggy Training School to encourage her to socialize more confidently with other furkids. :)

We also met a Golden Retriever. :) A pretty one he is. When he walked towards Popcorn wanting to make furiends, I heard him kinda bark.. But it sounded like his vocal cords were cut. :( It was very sad to hear him try to speak.. :(

Overall, it was a beautiful evening and Poppy walked beautifully :) We certainly had a great time exploring new paths and meeting new people. :) ♥ What a joy this was!

Who will get the furball’s attention?

Of all the tricks that Popcorn had learned over her 10 months, Popcorn hasn’t exactly learned to come over whenever she’s being called (at least not 100% of the time). Well that’s mainly because we haven’t officially taught her to respond to the “come” command yet. O.O And besides the furball often hangs around right beside us so there isn’t really a need to ask her to come over anyway! :D

At times when we do ask her to come over, we would softly clap our hands and call out, “Popcorn, come here!” and she would come. :) But that doesn’t always happen too. Yup, she has her moods this little one. Thankfully though, when the furball is outdoors or in the presence of unfamiliar faces, she listens well to the command. :) I guess i just hope to teach Popcorn to come to us every single time she hears the command. :)

Well tonight we got the furball to play the game of come over. Mom and best friend sat at one end of the living hall with tweats in their hands and I sat at the other end without tweats. Guess who won the Poptart’s attention? :P Mom with TWEATS of course. Yup the furball chose her tweats. As I called out to her, Poppy appeared to be in a dilemma. She kept looking at her tweats, and looking back at me.

The furball finally walked over and Mom tossed a tweat to reward her behavior. Mission Accomplished. Then dear ol’ best friend wanted in on the action so she opened the tweat container and *pop*! the cover opened. Best friend caught Poppy’s attention! Lol.

This playful exercise seems like is a great way to teach Popcorn the “Come” command — having her go to whoever who calls her over even when there’s a huge distraction from tweats at the other side. We’ll have to work on that. :D

We ended off the day playing fetch with the toilet paper roll upstairs :D This furball fetches almost anything we throw. She especially loves crumpled paper, tissue, wrappers, and toilet paper roll. :D 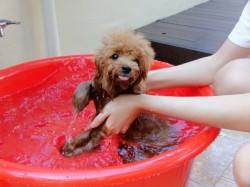